Squirt B2 Maroon Champions of District 2!

Forest Lake B2 Squirt Maroon Takes Home District 2 Championship, capping off a season where everyone contributed to the team’s success, kids made life-long friends and the players, parents, coaches and managers all pulled together and had FUN in true MN community based youth hockey fashion.

In front of a near capacity crowd this past Saturday at Tartan Arena, the Forest Lake Rangers defeated a very strong skating Mahtomedi Zephyr team 2-1 in overtime in a classic squirt hockey game. The Rangers alternating goaltending duo of Gage Winkler and Mitch Waataja earned players of the game and came up huge stopping an onslaught of 49 Zephyr shots throughout the entire game. Both of the Ranger goals were scored by Evan Rychley.  The OT GWG came on an offensive draw that was won by Kellen Melberg back to the point for a nice shot on goal by Jack Pavlas. The rebound was shot on goal by Connor Leblanc and eventually Rychley sealed the game with a shot over the stick of the sprawling Zephyr goaltender.

Leading up to the Championship game, the Rangers defeated the St Paul Capitals 3-1 in the quarterfinals. Evan Rychley scored very early in the game, skating his way around the Capitals Defense and a zipping a sniper shot to the lower right corner.  The GWG was scored by defenseman Cade Crep on an incredible rush up the ice. Crep stickhandled his way around the Capitals and then sniped through the 5 hole on the goaltender.  The 3rd Ranger goal to seal the victory was scored by Kellen Melberg. Making a great hockey play by blocking the Capitals D-man’s shot, Melberg out skating everyone and made an incredible deke on the goalie and buried the puck in the top corner.

For the semifinals, Forest Lake had to face a tough Roseville opponent that had just defeated them a week before in a physical 4-3 district game.  The Ranger players brought their top effort for this playoff game, winning decisively 5-1, while peppering the Roseville goalie with 45 shots.  Josh Holzschuh got the Rangers going early when he was tripped by a Raiders defenseman and the refs called a penalty shot.  Holzschuh made a tremendous move on the goalie and buried the puck in the yawning net.  Holzschuh went on to score again. Evan Rychley added 2 goals and for the other Ranger goal, Elliot “The Big E” Schaefer had a fantastic end to end rush using his silky-smooth mitts and rocket like snap shot to score for the Rangers.

Congratulations to the Forest Lake B2 Squirt Maroon - All the Ranger players hustled throughout the season and the playoff championship run! 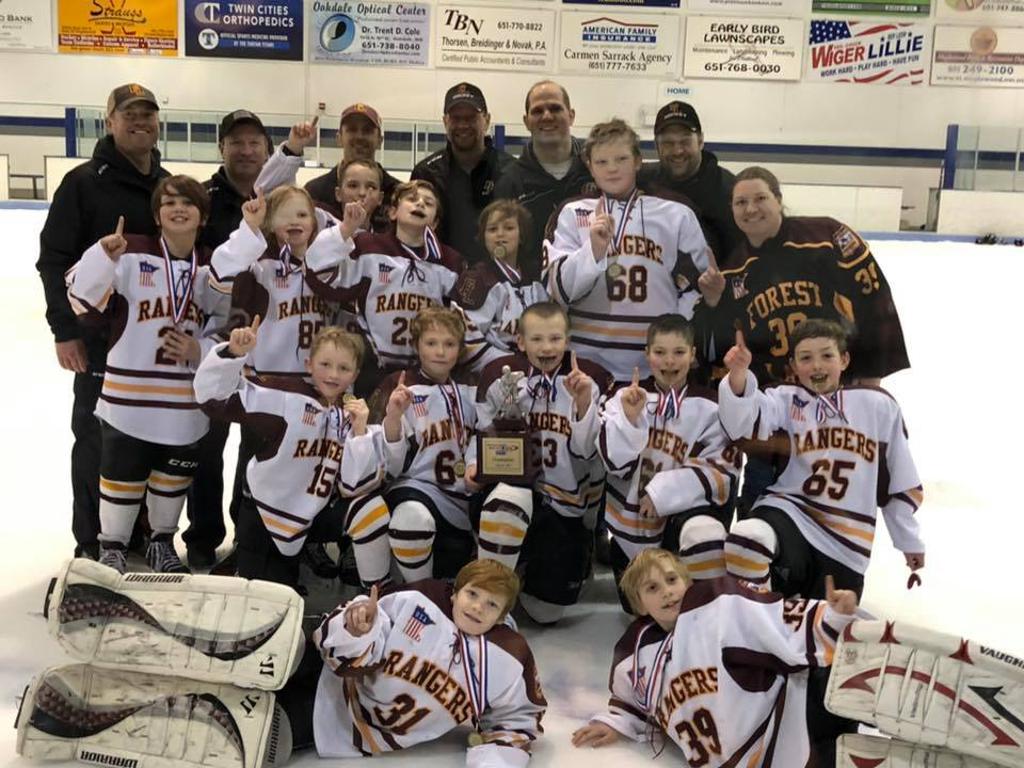