10U B Maroon win Cupid Classic in shoot out!

The 10U B Maroon team takes the Championship at the Cupid Classic Tournament in Bloomington Jan 23-27 in a shoot out!

The team started off the tournament with a late 8:30pm game Thursday night against Wayzata.  FL girls came out strong scoring 2 goals in the first period.  3 more were added on in the second, putting them in to running time for the remainder of the game and adding 2 more goals in the third for a 7-0 victory.  Goals were scored by Thompson (2), Roche, Halweg, Wiltzius, Borene and Poferl with assists going to Tuma, Weinert, and Borene.  Wiltzius received the Player of the Game honors.

The Rangers took on tough competitor in Cottage Grove 10U Green Friday night.  The score was 0-0 after the first period with both goaltenders stopping multiple shots.  The Rangers opened up the scoring in the 2nd period with a goal by Thompson.  CG tied it up near the end of the 2nd period and pulled ahead in the 3rd.  CG added an empty netter to secure the win.  Thompson received Player of the Game honors.

Coming in to Saturday the Rangers knew that they needed a win and had to keep Eden Prairie to less than 2 goals to capture the wild card seed and make it into the championship bracket on Sunday.  The game started out much slower than anticipated and had the FL fans a little nervous.  After 1 period the score was 1-1 and 2-1 at the end of the second period.  The Rangers kicked it in full gear scoring 5 goals in the third period and not allowing any others by EP to secure the wild card position.  Goals by Borene, Thompson (3), Goar, Halweg, Tuma with assists to Thompson, Tuma, Roche, and Wiltzius.  Goalie Peek picked up the Player of the Game honor for this game.

Sunday brought an early 8:00am game against the top seed from pool A, Farmington.  The Farmington team had only allowed 1 goal for the weekend thus far, but this didn't worry the 10U Maroon Rangers!  Once again the Rangers opened up the scoring in the 1st by Thompson, assist by Borene.  Farmington answered back late in the 1st and then Tuma, assist by Wiltzius, added another goal for FL to end the 1st period.    Thompson added 2 more goals in the 2nd for her 2nd hat trick in as many games!  Farmington added 2 more goals in the 3rd, but the Rangers were able to hang on for a 4-3 victory putting them in to the Championship game!

The championship face off would be at 3:00pm vs Delano.  Delano was another tough team and kept the Rangers on their toes.  Delano was on the board first in a tight 1st period.  Thompson, assists to Wiltzius and Tuma,  put the Rangers on the board with 24 seconds left in the 1st.  Thompson added another for the Rangers in the 2nd with Delano answering back and adding a third to end the 2nd with a 3-2 lead over our Rangers.  The 3rd period was a nail biter with both teams giving their all.  Poferl, assist to Thompson,  scored to tie the game with just under 2 1/2 mins remaining in the game.  This game was going to OT!  OT ended with the game still tied and the Rangers were headed to their first shoot out of the season!  Halweg would shoot first for the Rangers, no goal.  Peek in net stopped the first shot from Delano.  Wiltzius was up next for the Rangers, no goal.  Peek again stopped the Delano shot.  Thompson was up next and was able to get one past the goalie for the lead.  Delano's final skater was up and goalie Peek had an awesome blocker save to end the game and the Rangers WIN!!!

The girls played an excellent tournament and came back to take the Championship from the wild card seed.  Congratulations to the 10U B Maroon players, coaches, parents and fans! 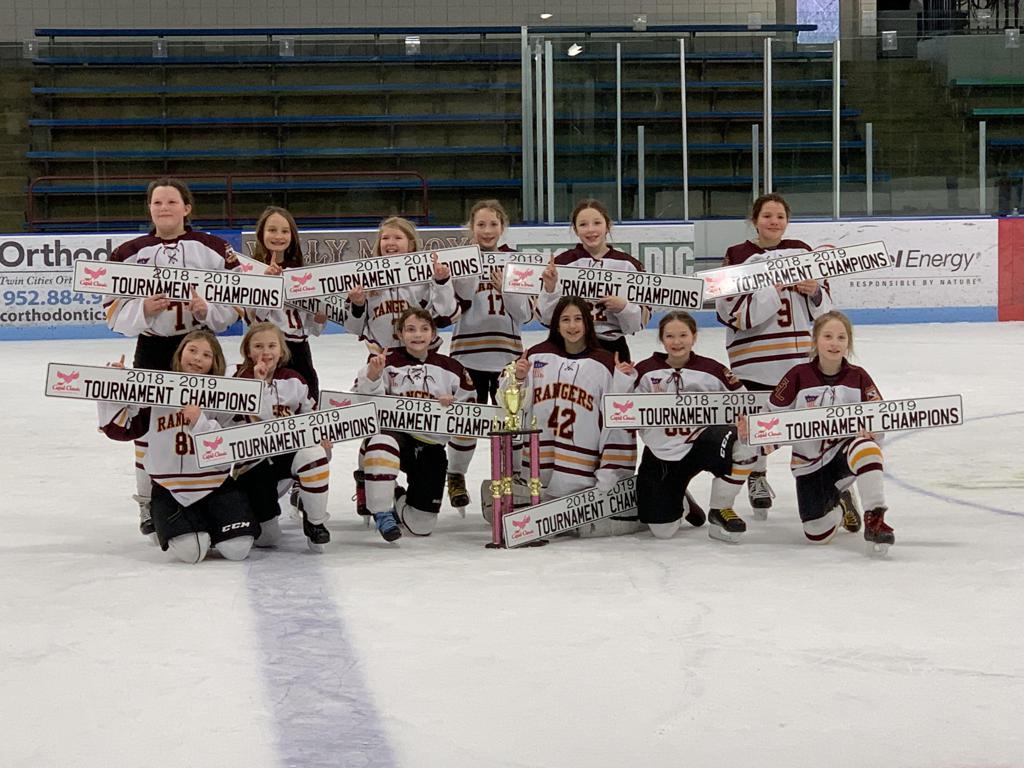